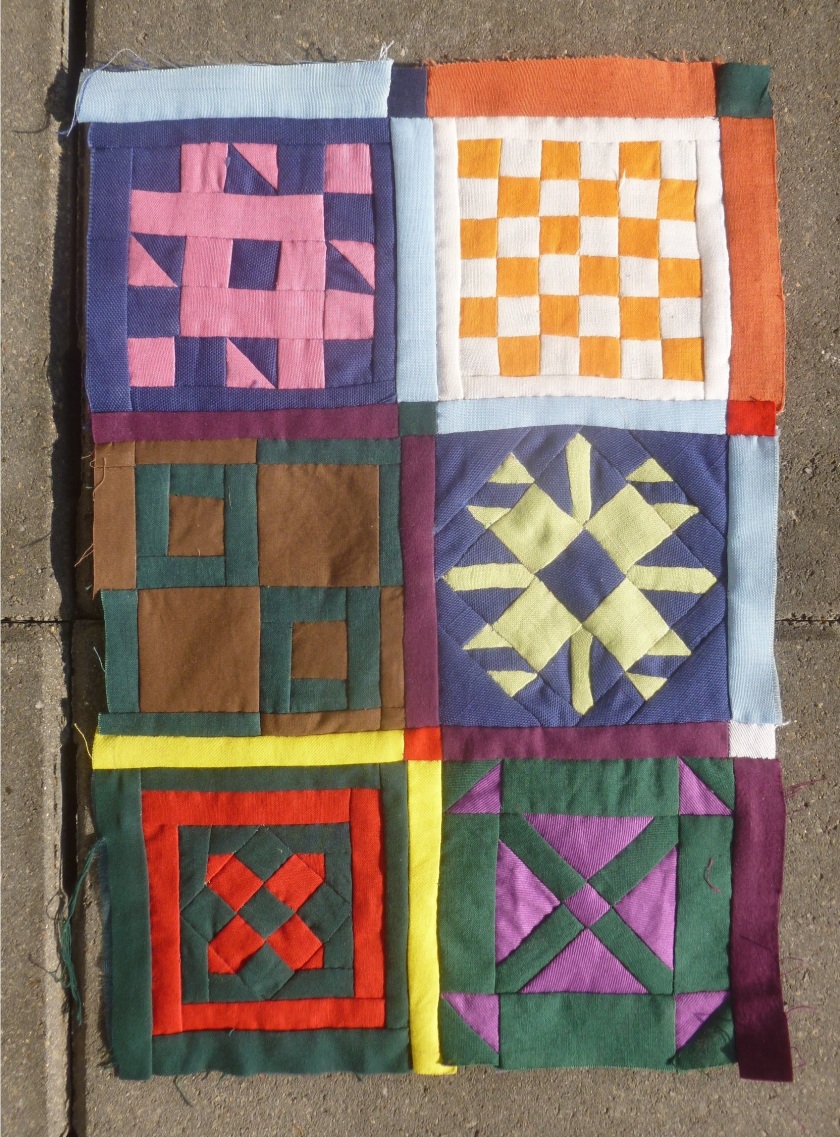 So I was in church and had a revelation. Not the kind one usually has in a church, but a revelation nonetheless. I find it is often the quiet places where one just sits and experiences things, which are most fruitful for ideas. Same as for going to the toilet or walking to a friends place. The Dear Jane revelation I had were colour choices for the rest of the quilt. I was had been thinking about it for weeks already before the solution came to me. The tricky thing was that I wanted the quilt to be as bold as possible, but the colours also had to work well together.

Which colours did I decide for the quilt?

In the introduction of the Dear Jane, I  already explained that the background colours for the square blocks in the middle as red, green, blue and white. The Dear Jane quilt joins those squares with a piece of sashing and a little square between the sashings. Sashing is a border of fabric between the blocks of a quilt. For the sashing, I decided on orange, yellow, purple and blue. In the picture on top, you can see the sashing and squares of my Dear Jane.

When I had decided the colours, I still had to decide how to use those colours. For the background colours, I used the design above.  For the sashing and square, I wanted a design that fits with that one. I tried out several different ways on paper before I decided on the final one. It turned out that it works to more or less reverse the order of the basic blocks in a cascading manner. In this way, the two sets of colours will weave through each other. At least that is the intent, we’ll see how well that works in the finished quilt!

The little crosses you see are the small squares which join the sashing. You can see those as well in the picture on the top. Those will be the colours of background colours of the squares to keep the crazy down a bit. It works to have colours appear in several places to make the overall piece look more like a whole.

On to hoping for fabric

When the colours were decided I pulled out all the solid, not patterned, fabric I had. This was to see if I had suitable fabric in my stash. I love working from my stash, because usually, that triggers my creativity more than just buying whatever I need. Also I like to keep in the quilting tradition of using ‘whatever you can find lying around’ and to keep it as economical as possible. It turned out that I had more large pieces of solid fabric as I thought! What a nice surprise. After some deliberations, I decided on the colours you can see on the right in the picture below. Some of the finished blocks and the background colours of the blocks are scattered around as well to see how the fabrics work together.

The four colours used in the sashing are also going to be used in the triangles. Sometimes when one goes crazy with colours and design it is important to have some recurring colours or features. In that same line of reasoning, the background colours will be used for the four corner kites, together with the pink you also see in the picture. I chose pink because I had the fabric and it is a nice contrasting colours with all the other ones. Maybe I’ll also use the background colours in the triangles, but that is something I will decide later when all the squares are finished.

So, did the colour scheme work?

That is a question I was continually asking myself while I was busy sewing the squares. At a certain moment, curiosity became too much and I decided to start joining some of the squares together to see. This was possible because I decided to use the arrangement of blocks of the original Dear Jane. This was probably a smart move anyway because otherwise adding all the sashing and little squares at the end was going to be a bit tedious.

This piece is made of the six left bottom blocks of the Dear Jane sewn together. The cascading effect of the sashing colours will be more obvious when more blocks are added. Still, it gives a good idea of the direction this Jane is going.  Below is the scheme I use to colour in all the blocks I’ve finished so far. 42 down, 169 squares to go! (Yes I’m a bit behind writing about the blocks, it will happen in due time I’m sure!)

Since fabric choices are such a personal thing, I am very curious what you think of the colour choices. Part of the fun of quilting and the Dear Jane is also seeing what other people come up with.

Some questions for you:

Here are some links to other Dear Jane posts:

See my DeviantArt or Instagram (username: bella.g.bear.art) for more artwork and WIPs. You can also follow my blog by clicking on the button on the left or by filling in your email address. There will be a monthly update at the end of every month and a new blogpost every Sunday or Monday.

Share this post for the sake of all the people who need more colour and creativity in their life!

How to support me